last ten years, the biggest unicorn firms were born like Uber and Airbnb. However, even though Bitcoin isn’t a company, the best investment of the decade belongs to the decentralized cryptocurrency Satoshi created. In fact, Bank of America’s recent securities report highlights that an investment of $1 in bitcoin at the start of 2010 would now be worth more than $90,000.

This week, a great number of people are reminiscing about the last ten years and a slew of individuals understand that the advent of Bitcoin was quite significant during this period of time. “The most valuable startup of the last decade didn’t raise money, didn’t have employees, gave away the cap table, and let anyone invest,” said the popular philosopher Naval Ravikant. Besides Ravikant’s opinion, there’s data that shows bitcoin was the best investment during the last decade.

Bank of America’s recent securities paper explains that between 2010 and 2020, oil has weakened and “negative interest rates have been good for gold markets.” But if a person invested $1 in bitcoin in 2010, it would be worth well over $90k today, BoA’s report underlined. Because of bitcoin’s great performance record, the decentralized asset has surpassed every investment vehicle in the last ten years.

Some of the best performing investments of the decade. Happy New Year’s everyone.

*Bitcoin enters once publicly traded on Coinbase in 2012 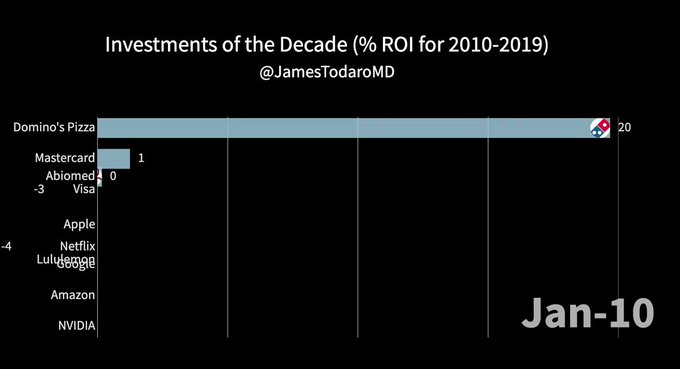 1,104 people are talking about this

Now let’s just say someone followed gold bug Peter Schiff’s advice and invested in gold in 2010, which was trading for $1,113 per Troy ounce at the year’s open. Ten years later, gold has done well for itself touching a high of $1,542 per ounce and that’s a fairly decent +38% gain. In the last decade bitcoin, however, has gained a whopping +8,999,900% and this year alone, BTC has outpaced gold’s market performance in the last ten years. In 2019, BTC has gained +96% compared to gold’s +10.8% increase.

Bitcoin Shined Without a Centralized Marketing Fund, No Salespeople, and No Roadshow

Besides precious metals, if Bitcoin was a company it also outpaced investments in the most profitable unicorn businesses created in the last decade. Profitable startups throughout 2010 and 2020 include Uber, Facebook, Airbnb, Snapchat, Spacex, Tesla, and Pinterest but an investment in bitcoin surpasses all these public stocks by a long shot. For example, if you compare the +8.9 million percent BTC gain to investments in Netflix (+4,177%), Amazon (+1,787%), Apple (+966%), Microsoft (+556%), Disney (+423%) and Google (+335%), numbers show there is no comparison. The angel investor and former CTO of Coinbase, Balaji Srinivasan, recently explained his thoughts about the cryptocurrency revolution during the last decade compared to the decade’s unicorn firms.

“As the decade ends, the biggest unicorn of the 2010s wasn’t Uber, Airbnb, or Snap — It was Bitcoin,” Srinivasan tweeted. “Please note that all three of these [companies] and many other unicorns are great companies — I take nothing away from them. But to my knowledge, nothing else founded in the same timeframe held at $100 billion for a longer time.” Srinivasan added:

From an investor standpoint, this is important to know.

A number of crypto proponents agree with Srinivasan and Ravikant’s statements about cryptocurrencies throughout the last ten years and the subject is often discussed on forums and social media. Replying to Srinivasan’s tweet, former Bitcoin Foundation director Bruce Fenton said:

[Bitcoin did all of this] without a centralized marketing fund, no salespeople, no roadshow people pitching sovereign wealth funds or family offices and no fundraise or premine.

Even though the digital asset was the best investment of the decade, it also provided significant innovation, financial disruption, and changed the way people perceive money. People can bypass corporations, financial institutions, and governments in a censorship-resistant fashion like never before. It’s safe to say that cryptocurrency innovation will make the next ten years quite revolutionary.

Disclaimer: This article is for informational purposes only. It is not an offer or solicitation of an offer to buy or sell, or a recommendation, endorsement, or sponsorship of any products, services, or companies. Bitcoin.com does not provide investment, tax, legal, or accounting advice. Neither the company nor the author is responsible, directly or indirectly, for any damage or loss caused or alleged to be caused by or in connection with the use of or reliance on any content, goods or services mentioned in this article.

Cardano's most awaited project Shelly is ready to launch around July 29, 2020, revealed by…

More than 4 million Samsung smartphone users in the U.S. and Canadian markets will soon…

U.S. stocks are set to open cautiously Thursday, consolidating ahead of the latest weekly jobless…

China’s Digital Currency Could Emerge Sooner Rather Than Later

The Chinese government has been working swiftly to digitize its currency. The stakes, however, are…

Central bank digital currencies (CBDCs) pose no threat to Bitcoin’s value proposition, instead, they will…